IMAGE FORMATS: which to use where & why

There are a number of strange image formats that you can schoose from when you are working on your website. People often default to one on an other but that is not the best way to make a decision.

Understanding what the different is between the formats will help you to build a quicker site & your users love speed. Just as google does!

Once you choose the image format to use you also need to ensure the images sizes are correct dpi (72 or 96 dots per inch ) & dimensions – too big & they will slow the site down – too small & they won’t look clean & clear,

Image sell so get them right the first time. 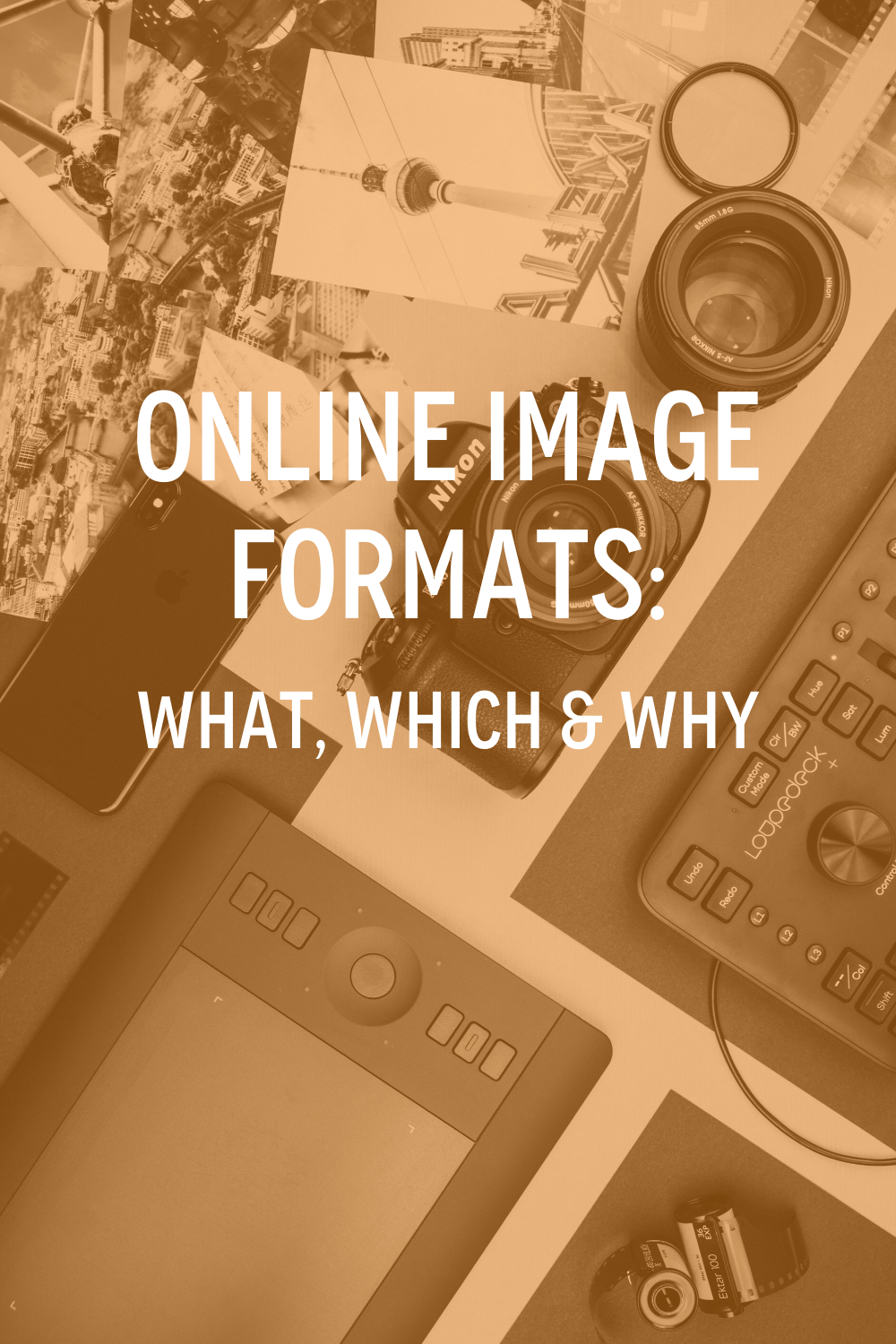 The most common example are animated GIFs which are several images or frames combined into a single file. These are those cool soundless loops that autoplay and are more like a flipbook. This format is lossless meaning that visual quality is not degraded and supports both animated and static images. The GIF (Graphical Interchange Format) was invented in 1987 by Steve Wilhite, who was a US software writer looking to animate images in as little a size as possible and in colour. At the time there was an equivalent format(RLE) but was only in black and white. GIF is not suitable for colour photographs and images with colour gradients due to its limits. However it’s great for simple image like logos and graphics with solid colour.

Fun fact: GIFs have become so popular that in 2012, the word “GIF” was named the Oxford Dictionary Word of the Year.

When to choose GIF:

GIF was the standard for 8-bit colour images on the internet until PNG became a useable alternative and despite having moving images much better formats to GIF exist e.g. MNGs (multiple image network graphics)

This lossless data compression format was created to replace the (GIF). It is an open format that has no copyright limitations. First developed in 1995, PNG (Portable Network Graphics Format) was created to keep up with technology where GIF was lacking. At that time GIF was well established but unable to support a wide spectrum of colours.

When to choose png:

This makes it tough for the GIF format as it has almost been replaced completely by PNG in the publishing world despite its popularity. The win that GIF has though is the smaller compression size compared to PNG.

If you want to optimise in PNG what you want to do here is reduce colours, maximize repeated pixel areas, minimize drop-shadows, and control all smooth transitions with application of dithering. Tools such as Photoshop that are specialized can help reduce images significantly while retaining acceptable quality.

This file format widely used in professional photography. Introduced in 1992, JPEG(Joint Photographic Experts Group) in short JPG, can be compressed to as small a size as you like and is a matter of trading off file size and image quality because it uses lossy compression. As much as there’s little perceptible loss in quality you run the risk of losing data due to heavy compression. The typical ratio is 10:1 which means that if you had a 10mb photo that you want to convert to JPG format conversion it will be 1 mb.

When to choose jpg:

While the formats (PNG, JPG, GIF) I mentioned are Raster formats, SVG is a vector format. Developed in 1999 SVG (Scalable Vector Graphics) is an XML (Extensible Markup Language)-based vector image format for two-dimensional images. A vector is an element with a specific magnitude and direction. SVG files are simply plain text files that describe lines, curves, shapes, colours, and text and come with support for animation and interactivity.

When to choose SVG:

NOTE: This article is specifically about image formats for the web. There are a whole lot more image formats used in the design world for print media.

Well hello there. If you've got as far as this, I'm pretty sure you must be interested in visual design ...

we'd love for you to join our Enterprise by Design VISUAL DESIGN list.

Welcome to our community! Do let us know if there is anything you would like to know about designing your brilliant business.

At the most, we'll only ever send a weekly email which we promise will have great & useful info & our most current articles.

Many of the links on this site are affiliate links meaning that, if you click on a link with a heart (♥) immediately after it & then buy something from that link, I will get a commission.
It doesn’t cost you anything extra & I only recommend things that I’ve tried & tested, so please use my links so I can keep growing the site.
Full disclosure.